The act of making art is searching for or creating values. Uniqueness is a value on its own, and showing this through creative processes is aesthetical or conceptual experience.
It was a crucial step of our technological evolution when we learned to control electricity. Electrography is a way to create fine art with using electricity. Manipulating the flow of the electric charge can lead us to explore the unique aspects of our material. We don’t need anything else but the creating mind, the editing hand and the proper equipment.

WOOD
Tree rings show us the the life of a tree: its age, rythm of growth and enviromental effects. Bartholomäus Traubeck has built a music player device, what transform the wood’s circular patterns to sound, similar to the process how a turntable reads the signs of the vynil records. This way, a life of a tree can be converted into a unique piece of music. The sensors on Traubeck’s device gather data about the color and texture of the wood and transform it to piano notes.

There’s a young, geeky dude called the Backyard Scientist who makes hobby videos where he presents simply physics experiments to demonstrate certain phenomenas in action. Last time he showed how you can carve into wood with electricity. He used a plywood and brushed it with water and baking soda. Then he jacked on a hacked microwace transformator. The high voltage ran through the wet surface, and erosion took place inside of the nervure. This is how patterns got carved into the plywood.
Melanie Hoff, an artist from Brooklyn, uses the same method, but she’s bombing the material 15,000 volts of electricity. 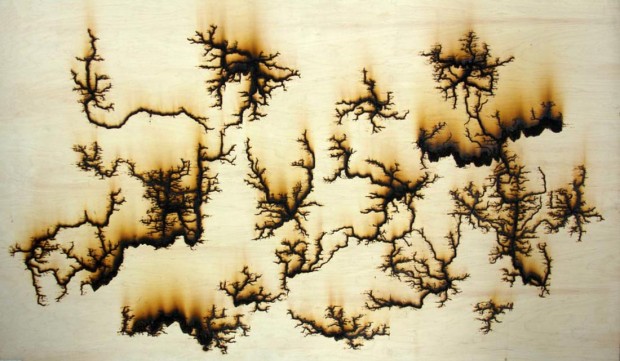 Luke Evans Brittish artist deconstructed the well-known Xerox process to create his own art.
How does a copy machine work? When a photo conductive surface is given positive charge, the image of the document is exposed of the surface. This makes the charge move away from the surface in every space except for the imagery what remains charged. Negatively charged powder spread over the surface sticks to the positively charged image. When paper is placed over the powdered image and given a positive charge, the negatively charged powder is attracted to the positively charged paper. Heat is used to melt the dry black pigment ont he paper, and voilá, a copy is produced!

Evans works similarly but the material of choice is acryl, what he bombs with massive amount of electricity, seriously high voltage: 400.000 volt. This surface receives the paint. Humidity, the shape and size of the electrode and the amount of ink modifies the end result, but in every scenario the end result is totally unique.

Microscopes are wonderful extensions of our senses, because they make us seen in detail those tiny structures what our eyes cannot detect. Rose-Lynn Fisher photographer in her project, „Topography of Tears” revealed the abstract manifestations of our tears. Back in that time Fisher went through a rough period and she teared up often during work. On time she decided to put her dried tears under the microscope. It looked like an aerial shot. Water, proteins, minerals, hormons, antibodies, enzimes, viscosity, evaporation… all these altered their shapes, that came out as unique as snowflakes.
Emotions forms different shapes as well. This means tears of grief differ from tears of pain what was caused by peeling an onion. This gave the core idea to The Topography of Tears that consists more than 100 photo shots.

The electron microscope works with electrons instead of ray of lights, and a digital camera projects the picture on the monitor.
Nikon and Olympus organizes great contests for digital micrographs. Let’s look at a few remarkable art pieces of Nikon’s 2015 contest.
[Nikon képek – Eye of a Bee, Larvae, Crystal, Sting, Pot] 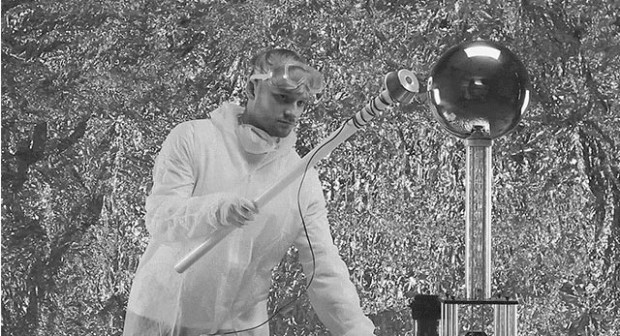 3D PRINTER
The 3D printer produces 3D objects. The most popular, easy to handle material is plastic, but they can alter anything from choclate to glass. It has its limits with colorization, so most of the time it gets painted afterwords by hand or industrial methods. Let me show you how this device can create wonderful art.

The saying that „we’re all individuals” became a meme. But becoming an individual trully starts inside the womb. This gave the opportunity for a Japanese Factory to earn big bucks. If you have 1275 dollars and you purchase a plane ticket to Japan, they’ll take photographs of the fetus in an MRI machine. After this they do the 3D modeling, and print a small figure in the shape of the unborn baby. Creepy, isn’t it?

But there are better ways to do this.

Gilles Azarro takes the voice sample of a new born baby’s first cry and reprocesses itt to become 3D digital data and printed as a picture.
In the beginning of the twentieth century, it was a huge craze to push the limits of 2D. The limits of the cavas, the limits of the flat. Tearing, breaking, building and other experimental acts took place. These and many more were fascinating ways to expand the borders of a concept, for instance a picture that hangs on a wall. With 3D printing there’s a new tool to form a surface, to create shapes that are not just for watching. These artifacts are ready to be touched. Ioan Florea, Shane Hope and Augustine Fou were ready to built in tactility as an extra sensory experience.

GLITCH
Various galleries were shared all over net which showed how redering can go wrong. Google and Apple Maps sometimes experience difficulties to process data. The end result is a hilarious collection of distorted reality.
In its technical meaning, the glitch is an unexpected fault in a software, a short lived mistake. This is a typical phenomena of digital systems. First it was defined at 1962 during an American Space Program.
Glitch int he software. It can happen accidently or it can be created intentionally. And it has a unique affect on us. It reflects to the code it consists of. It evokes a dissonance in our sensing. It manifests the noise itself in a visual way. It’s the perfect example of the artificial. Adressing this as the main topic, glitch art was born. It became a trend in music, video art, pictures and all kinds of new-media. It is artificial, retro, postmodern and urban. 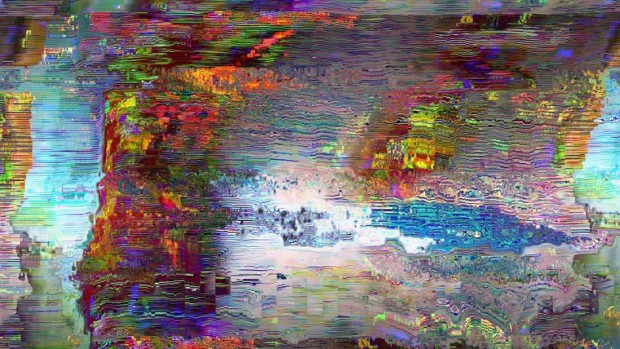 GRAFFITI
Talking about urban. Akay, Swedish street artist likes to incorporate complex techniques to make other street artists life simplier. He created a non-digital device, called the Robo Rainbow, what helps you create a rainbow within seconds on a wall. This way you are reducing the risk of getting caught and the form itself becomes more even. You purchase the sprays, attach it on the robot hand, and with rolling your bikes chains, the robot arm draws its half circle.
Golan Levin and Jeremy Ficca designed ROBOTAGGER. It’s an industrial robot arm what you can program to reproduce your tag on a wall. They used the GML, the Graffiti Markup Language. This development process was paralel with creating Eyewriter, and the same gang co-operated in it. Both devices could give those people the extra hand who need it most.

Tony Quan or Tempt1 graffiti artist became fully paralyzed because of a serious illness. Today he is only able to move his eyes. Friends and experties, artists and anginieers worked together on the EyeWritert. This is a low-cost eye-tracking system. It’s an open-source device, so you can build it at home, make further developments on it if you wish. This machine helped Tempt1 directing the computer to draw what he wants, and get his message outside of the hospital room. The guys organized a street action for him, where his tags and pictures were projected on a large factory wall, and thousands of people saw it.
Thank you! 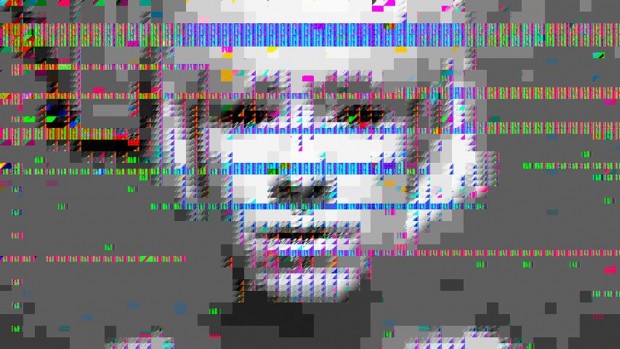 Search for more in this site